2015 has been year of the button-up shirts. So far I have made a Sewaholic Granville, two Sewaholic Oakridge, and two Colette Aster.

Thank goodness for Sewalongs! My second go at the Colette Aster was much smoother than the first one (made prior to the sewalong…).

Colette’s Aster pattern was released during the last leg of my 3 week vacation. Mom gave me a lot of feedback with the clothes she packed (some made by me). A loose-fitting button-up shirt that can be dressed up would be nice as most of the shirts she packed looked too outdoors. 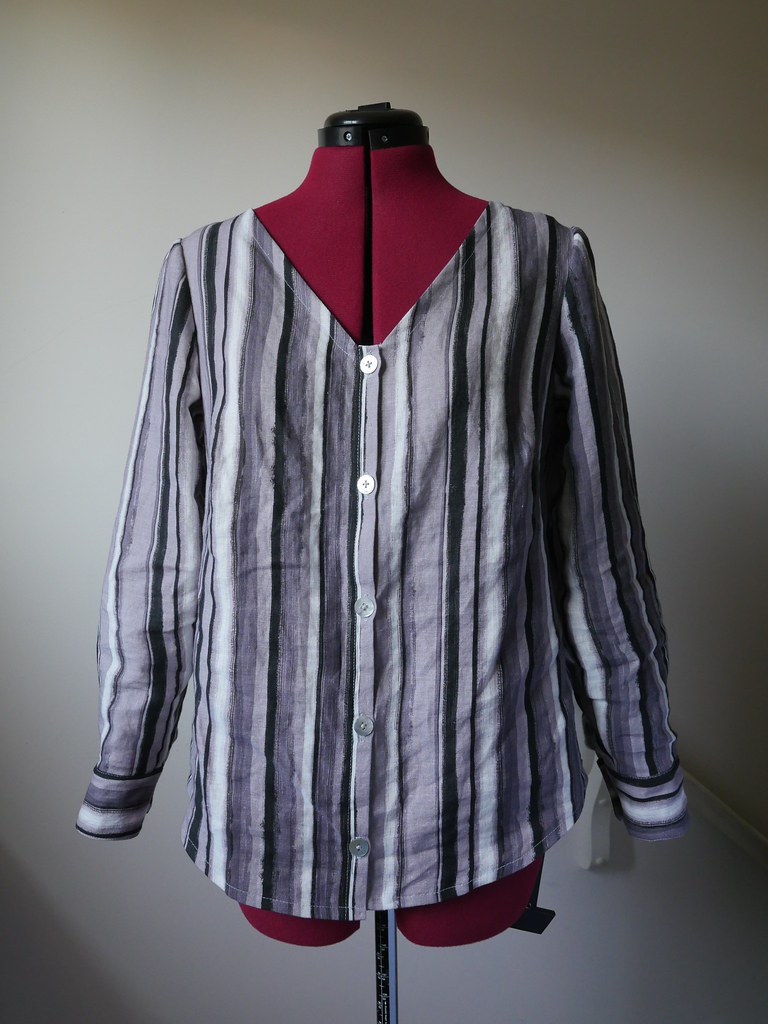 I was eating lunch in Shatin, Hong Kong (smack in the middle of a torrential thunderstorm which continued on for days) when I saw the pattern announcement. Showed Mom the pattern and purchased it right then. This called for another visit to the button store cause Mom requested large buttons. Who knew I would be thinking of sewing during my vacation. 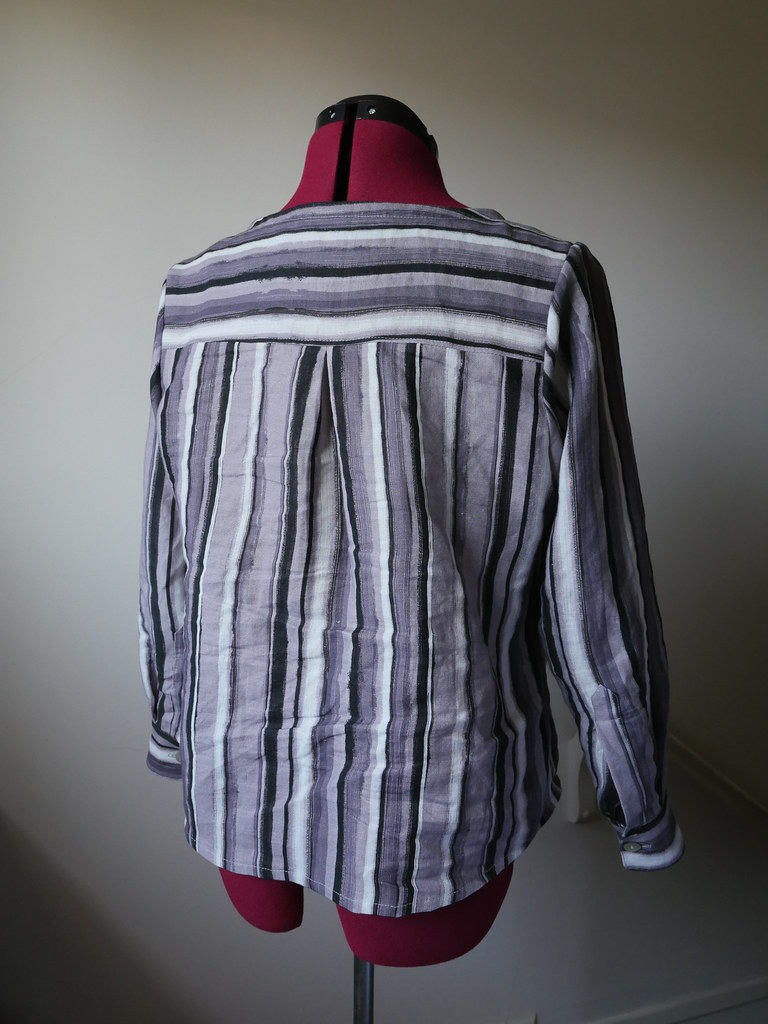 Linen, linen, linen. It had to be linen. No linen-cotton blend. 100% linen. My beloved Linen 2247 (which I gushed about before) had several fabric siblings at Fabricana. I did find them…on the 30% off table.

Bias tape and thread from my stash. As usual, buttons were chosen before I made the buttonholes. We used the 5/8″ shell buttons purchased in Hong Kong.

Second time makes are less stressful in putting it together cause you have been through it before. What continues to trip me up is the constant mindset to make it better than the last. Mom does notice this when she sees how nice the inside is. 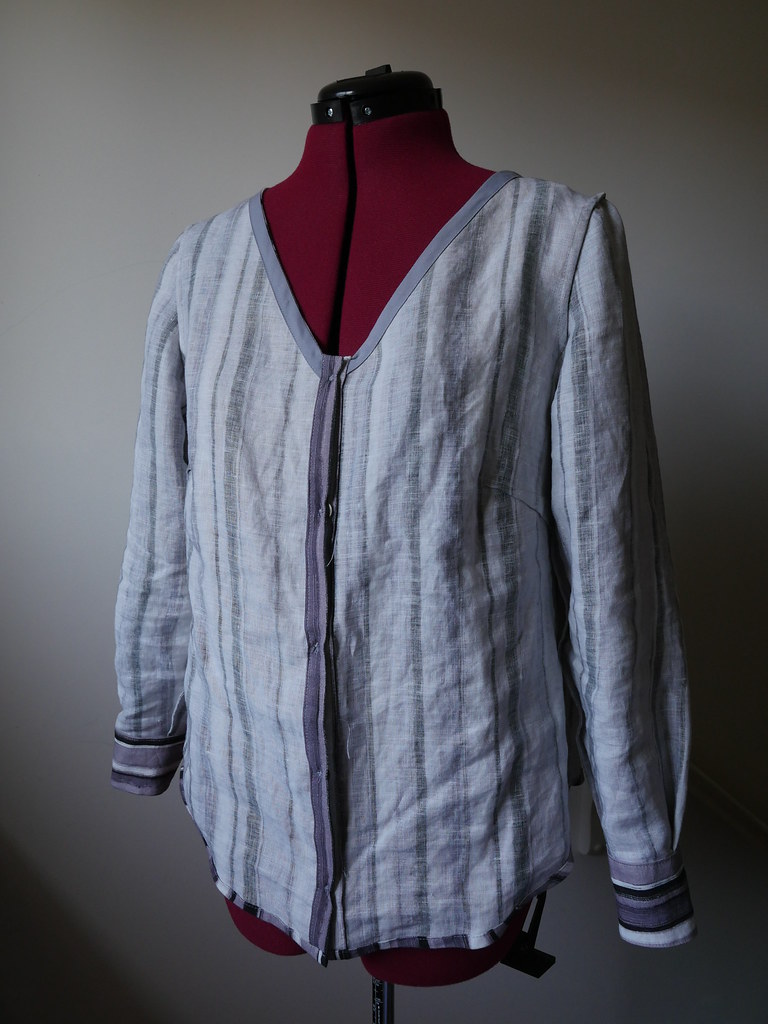 My confidence grows every time I repeat a technique. This time, I was very comfortable with making french seams, especially for the armholes. The key is to take your time and pin, pin, pin. 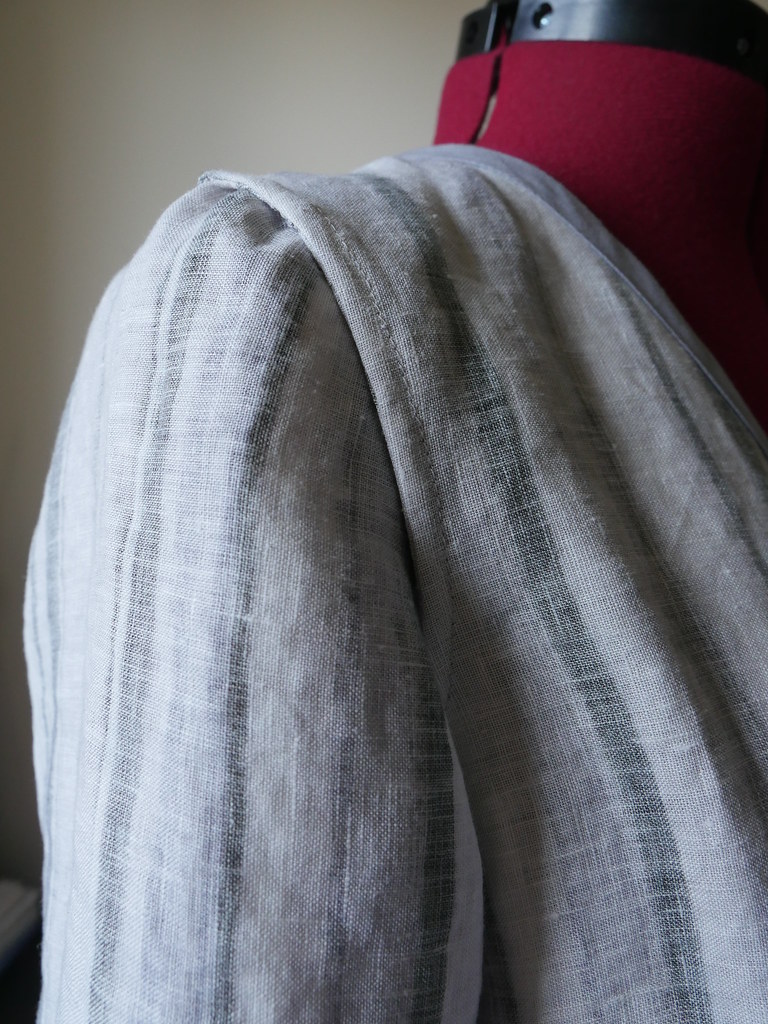 Though it is just a placket, the tower portion is designed differently between Sewaholic and Colette. When I made the Sewaholic placket, it was difficult to press down the small folds and create a nice tower. The Colette placket takes the rectangle section and folds it down to enclose all the edges inside. The point was more crisp and didn’t fray. 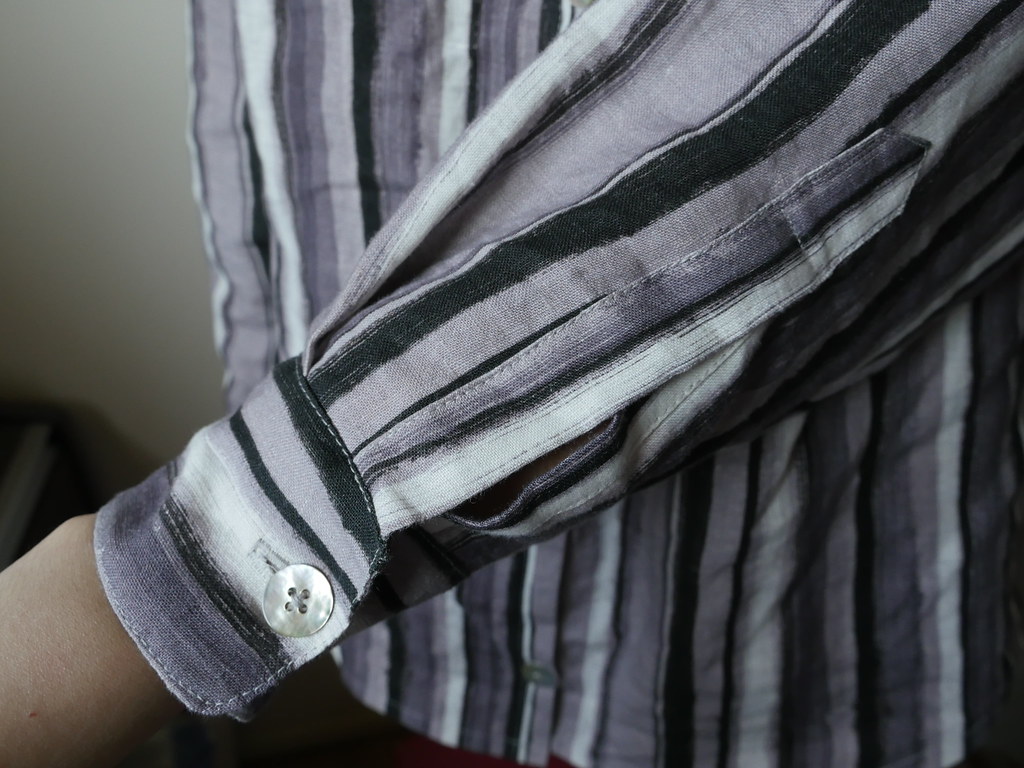 This is where I flubbed on the first make. The neckline instructions tells you to “Clip the seam allowance to the small circle at the neckline.” which I kept wondering since there was no indication of it on the line drawing instructions. I took a chance and made the clip. The neckline was edgestitched in place and I continued with the front placket. That’s when I discovered the ‘clip’ was wrong!! Instead of clipping to the circle on the neckline edge, I had done it from the placket edge. Big boo boo!! Luckily I was able to salvage it by lowering said portion by 1/4″. For the 2nd make, I took special care and zoomed into the sewalong photos of the neckline instructions. I took the plunge and made the clip as shown, it was correct. Yay!! Things were much smoother afterwards. 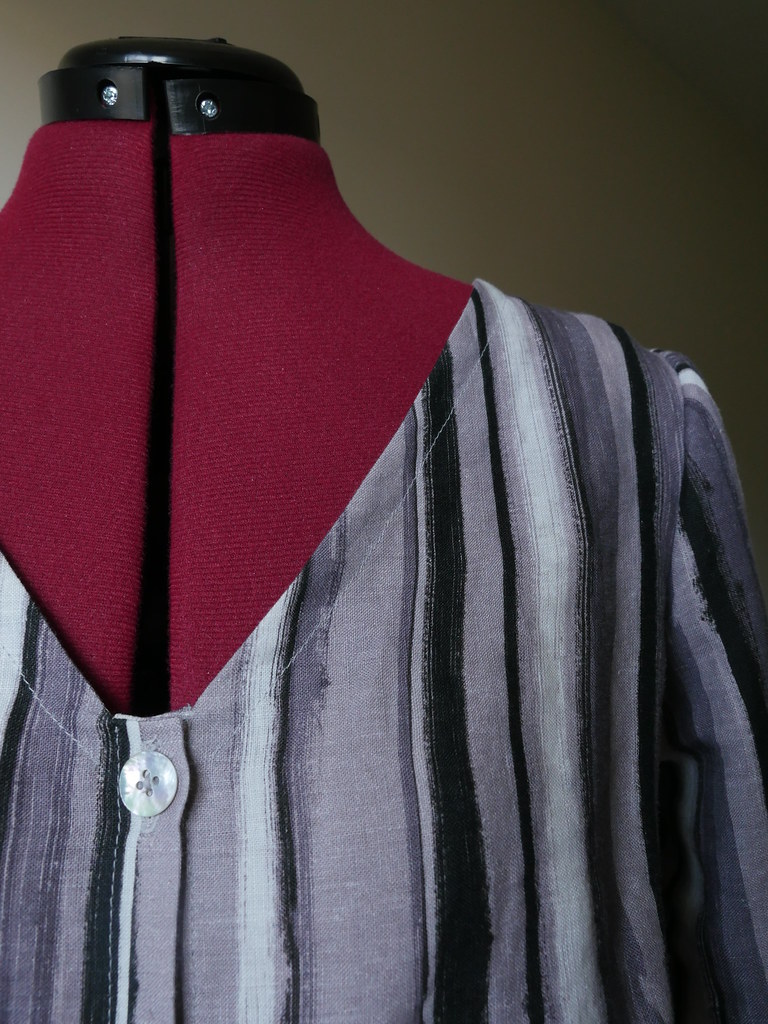 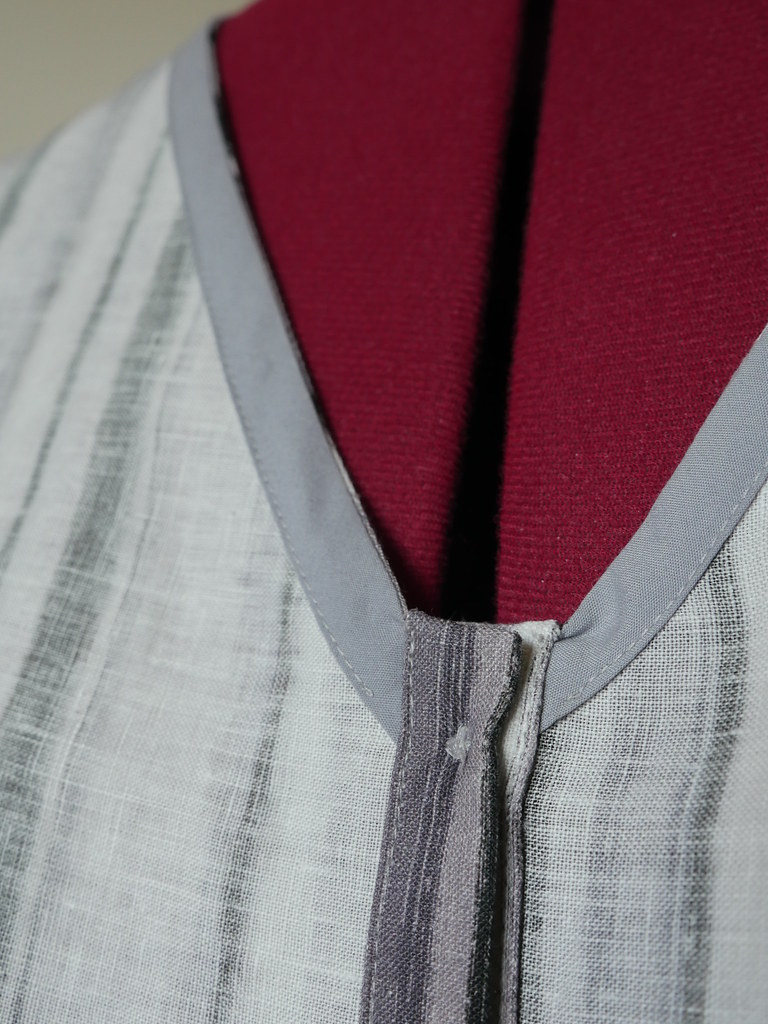 Before boarding the plane on my return flight from Japan in 2014, I bought a 3-colour FriXion pen for 600yen. They were the it product that year in stationary and bookstores. I tried it out on the flight and couldn’t find a real purpose for it since the ink can be erased by its end cap and it cannot be used for important documents due to its erasable nature. I let it sit on my desk for months before reading about it as a fabric marking tool. Before I’ve been using the Clover chaco liner but they are a drag to erase unless you put it in the wash.

After a quick scrap test of the FriXion pen, the pen has found its purpose. Now a permanent item in my sewing box, marking buttonholes have never been easier. Pick the contrast colour, mark onto the fabric, sew, iron over, and no unsightly lines! Now why didn’t I learn about this sooner.

Linen is prone to extreme creasing but that is the nature of it. Mom has worn this shirt for several days so those are worn-in creases. We like how the top can be worn loosely or tucked in for a more polished look.

If I were to make this for myself, I might consider raising the neckline a bit.

Sewing By the Month

Learning to sew on Dad's Singer under Mom's guidance

n. A state of tumultuous confusion involving a sewing machine.

Creating a handmade wardrobe, one stitch at time.

I love to sew

Ginger Jac
Make it 'til you fake it

Cut it out, sew it up, and pretend it's old. Vintage schmintage.

Did You Make That?

Leading UK sewing blog where we believe creativity is contagious

This is my blessed life. Family. Sewing. Travel. A simple blog by a sewing convert.